The Management of Good Leadership Promotion Network has paid a working visit to His Royal Majesty Oba Oyelude Makama, the traditional ruler of Owu Kuta in Osun State.

The visiting team was lead by the National Coordinator Olaniyi Odina. In his remarks, the National coordinator thanked the Kabiyesi for the efforts he has been making to project the Nigerian Army in a positive light by always mobilising media resources for the army.

In his response, HRM Oba Oyelude Makama welcomed the team to his palace and appreciated the efforts of GOLPRONET across the country. He expressed his total commitment to the drive to boost the morale of the army, by using the media to emphasis the strengths and achievements of the Nigeria Army. He encouraged GOLPRONET and allied institutions to think in the direction of partnerships with the army.

Other members on the visiting team are Barr. Ayodeji Ilori, and Balogun Damilade, the Kabiyesi Prayed for the National Coordinator and other members of the team. 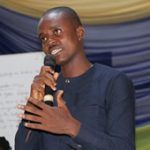